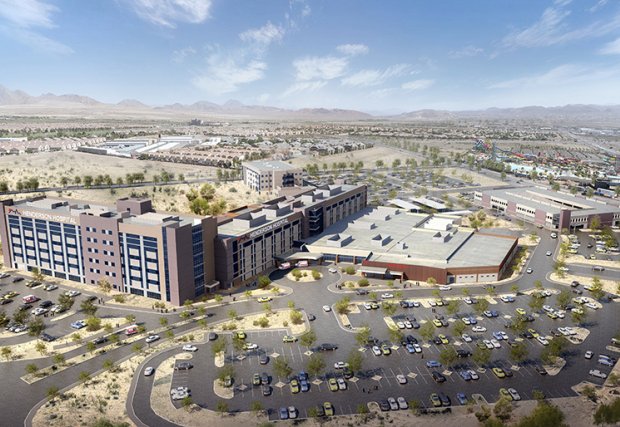 A new six-story patient tower is now under construction at Henderson Hospital. The project is valued at $150 million and will add 93 beds to our facility. It is expected to open in late 2021, with an additional 84 beds shelled out for future growth needs.

Phase one of the new tower includes the addition of 36 medical/surgical beds, the relocation of the existing 25-bed observation nursing unit, and increasing the observation unit to 33 beds. This phase also includes an expansion of our Women’s Services area by adding six Labor and Delivery suites, another Caesarean-section surgical suite, 14 new Neonatal Intensive Care Unit (NICU) beds, and more antepartum beds for high risk mothers-to-be. The project will also include enlarging ancillary departments such as Laboratory, Supply Chain, Pharmacy, Dietary, and Dialysis, and other areas that are crucial in the support of our increased patient care expansion.

Additional phases will include the build out of two more 36-bed medical/surgical nursing units, and potential NICU beds, based on the needs of the community, along with additional ancillary department expansions.

Upon completion, the project will also add approximately 30 beds within the Emergency Department when the observation nursing unit is relocated within the tower.

To accommodate the expected volume, a three-story parking structure with 480 spaces will be built, with the capability to expand to six stories.

The tower construction follows the completion of a $24 million expansion that included a 25-bed observation nursing unit adjacent to the Emergency Department, eight additional ER rapid medical exam/triage rooms, a second CT scanner, the shelling out of several more surgical suites and additional enhancements to the emergency entrance and lobby areas. The observation nursing unit opened for patient care on July 24, 2020.